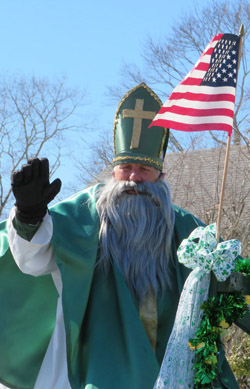 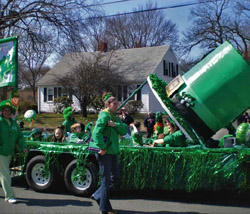 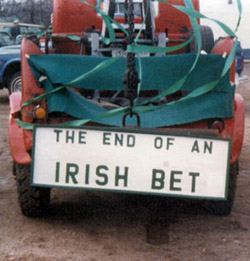 End of an Irish Bet!

It began as a friendly $10 bet between Jack Bailey and one of his employees about whether Jack could organize a St. Patrick’s Day parade in Abington, Massachusetts, a town of 16,000 people located 20 miles southeast of Boston.

Jack, who with his father Eddie ran Bailey’s Garage at the corner of Orange and Washington Streets, began decorating the tow trucks and flatbeds with green trim and signs. The police chief heard about it and secured a parade permit. That first year, 50 townspeople lined up in Abington Center in their decorated vehicles, and a new parade was christened. Jack has been the chairman ever since, and each year he rides in the parade dressed as St. Patrick, driven by his oldest son.

The parade, slated for March 17, 2019 marks the 40th anniversary of this special tradition, which is a testament to civic pride, volunteerism, and to the town’s Irish-American population. The U.S. Census states that 42% of Abington residents claimed Irish ancestry.

According to Jack’s wife Kathy, the parade has been a family affair from the start, with support from neighbors, friends and indeed, the whole town.

“Jack’s father Eddie was one of the committee members and the whole family was involved. Sons Tim and Ken and daughter Amy decorated the family car, winning many plaques for best decorated cars. I got to be the driver,” Kathy recalls.

“The early parades were all motorized and were held on the 17th of March. But when the 17th landed on a weekend day, it became a marching parade. Once the townspeople got a taste of that they lobbied for Jack to have a marching parade every year. Now the parades are always held on Sunday,” she says.

Marchers include a variety of local high school bands, legion bands, professional bands, drum corps, “and of course as many bagpipe bands as he can get,” Kathy says. A grant from Abington Cultural Council helps fund the parade, and the rest of the money to underwrite the parade comes from donations and fundraising.

Since Bailey’s Garage was ground central for the parade planning each year, the town named it St. Patrick’s Square, which is where the parade begins each year. Jack retired in 2015 and closed the garage, and the building now houses their son Tim’s home improvement business, Bailey Davol Studio Build. The building continues to serve as Parade headquarters.

Beyond the parade, Jack and Kathy are deeply involved in the community. Jack works for the St. Vincent de Paul food pantry and the Griffins Farm Park Committee. He helps local youth groups by holding car washes and a Boy Scout Christmas Tree Sale. Each July, they hold a Daylily sale, digging flowers directly from their garden for four charities. Kathy was a member and Chairwoman of the School Committee for 6 years, and is currently chairman of the Abington Child Study Group and President of the Abington Town Choir.

Naturally, the family is proud of its Irish heritage.

“Jack’s grandmother Bridget Hyland came to this country as a teenager. She came from Ballyporeen, Araglin, County Tipperary and passed away in 1988,” says Kathy. “My grandmother, Ellen McDade came from Meenarvara, Donegal at the age of 18. Her father was a ships carpenter in Belfast and other ports in Northern Ireland and Scotland. She met my grandfather Tom Mullen, also from Donegal, (Redford, Culdaff) in this country.”