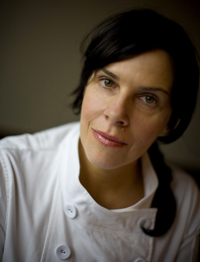 2009 has turned out to be quite a year for South Boston’s famed chef, Barbara Lynch.

In April, Lynch was on hand at the Volvo Ocean Race showcase at Fan Pier on Boston’s waterfront, where she was a featured chef at the Tourism Ireland pavilion. There she put on daily demonstrations with Good Food Ireland for visitors from around the world.

In May, the Crittenton Women’s Union honored Lynch with the Amelia Earhart award, which is presented annually to a person “who has significantly contributed to the expansion of pportunities to women.”

And Stir is also the name of Chef Lynch’s demonstration kitchen and cookbook library, where workshops, classes and cooking demonstrations take place through the summer.  Stir is located at 102 Waltham Street in Boston’s South End.