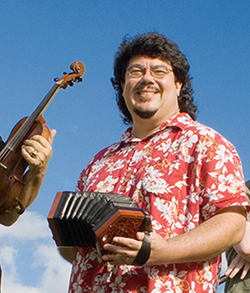 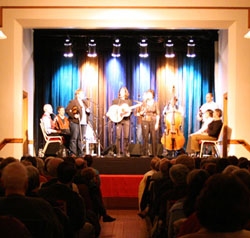 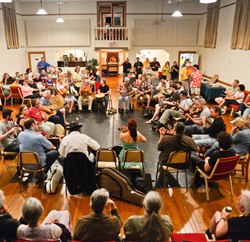 Russell Gusetti is executive director and performance booker of the Blackstone River Theatre (BRT) in Cumberland, RI. He created the annual Summer Solstice Festival each June, and is a founding member of Pendragon, a popular Celtic band.

Now in its 14th year, the Blackstone River Theatre has become an integral part of the Celtic music circuit for touring artists. What is the secret to your success in attracting so many well-known artists to return, year after year?

It is definitely gratifying that we have become a primary spot for Celtic music, especially since our capacity is only 165 seats. From the outset, we brought our experience as musicians to the table: what it was like to be treated well and not so well. We vowed to build an amazing sounding room and make it a truly intimate listening experience. We have one of the best acoustic sound engineers I know, and we treat all the artists with respect and true enthusiasm to have them with us. In the end, it's that simple: be nice, be helpful and love what you are doing. We consistently hear from our performers that our sound and our volunteers are among the nicest to be found anywhere. And when performers are treated well and know the sound will be great, it allows them to relax and put on the best show they can.

Blackstone seems like an incubator for artists who go on to successful careers. Do you feel like Blackstone has been instrumental in helping launch new artists?

I humbly hope that is what we have done and will continue to do. In reality, we are a small, nonprofit venue with only one paid staff member, so we simply can't afford some of the bigger, more famous acts. So I look for acts that excite me: regional acts that have never played in Rhode Island, or acts from Ireland or Scotland making their first or second tour of the states, trying to make a name for themselves. It sometimes amazes me the acts we have gotten to play here – from Karan Casey and Lunasa to Cherish the Ladies, Dougie MacLean and so many more. But it is equally as gratifying to bring a group that is good but unknown here. That's where the trust comes in and if all goes well, we get to be part of building an audience for a group and they get a venue to return to, knowing it will always be a highlight on their tour. Nothing makes me happier than presenting an act for a second, third, fourth time... because that means the relationship is working for everyone.