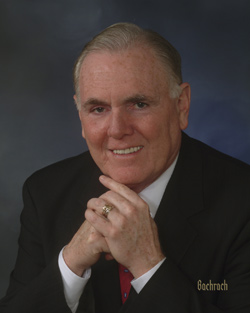 College Basketball star, Mayor of Boston, US Ambassador to the Vatican -- Raymond L. Flynn has represented his beloved neighborhood – South Boston – extraordinarily well over his lifetime.  He lives there still with his wife Cathy, with their six children and fourteen grandchildren nearby.

Flynn began his illustrious political career in 1971 representing South Boston in the State House, then moved over to Boston City Council before becoming Mayor, a post he held from 1984-1993.  He left City Hall to serve as US Ambassador to the Vatican under President William J. Clinton.

When he returned home to South Boston, he penned a novel, The Accidental Pope, and a biography of Pope John Paul II, a man he befriended while in Rome, entitled John Paul III: A Personal Portrait of a Pope & the Man.

Today Flynn is involved in a variety of Catholic causes throughout the country, and still weighs in on Irish-American issues on the national level.  He is a frequent public speaker who works both publicly and behind the scenes on blue-collar, Irish and Catholic issues.

Ambassador Flynn was selected to be the Grand Marshall in the St. Patrick’s Day Parade in New York City on March 17, 2007.  The parade has run for 249 consecutive years, and Flynn is only the fourth non-New Yorker to lead the internationally known parade, joining Irish Prime Minister Albert Reynolds, actress Maureen O’Hara and business & sports leader Timothy Rooney.

In 2010, Flynn was the Grand Marshall at the Cape Cod St. Patrick’s Day Parade.

When asked to explain his accomplishments in life, Flynn said, “I credit my parents, my Catholic faith and my South Boston neighbors and friends for my success in life.  God has blessed me with a loving wife, six great children and fourteen wonderful grandchildren.”

Congratulations to the pride of South Boston.