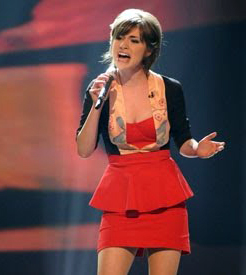 Now in its ninth season, the popular show held live auditions in Massachusetts last summer, and several thousand contestants showed up!  Siobhan passed the audition, and got the coveted “Golden Pass” from the judges to appear on the live show.

Since then she has been wooing the judges and live audiences with her powerful singing voice, nailing songs by Stevie Wonder and Chris Isaak.

A graduate of Barnstable High School in 2008, Magnus built her musical chops by starring in the school’s musicals directed by John Sullivan, who oversees one of the largest high school theatre programs in the state.

The fourth of six children, Magnus credits her parents with raising her in a musical household and giving her a love of music.  She is a glass-blowing apprentice at Morrison Glass Studio in Hyannis, working for Brooks Morrison and also fronts local rock band, Lunar Valve, on the Cape.