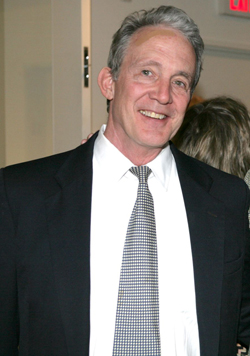 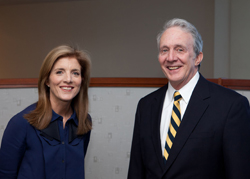 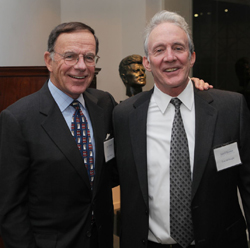 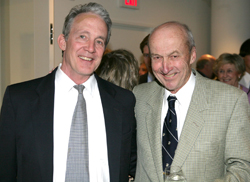 
They came to sing the praises of Tom McNaught. Political leaders, historians, friends and family journeyed from across the country and across the city to the JFK Library in Boston recently to personally thank the congenial, effective and popular administrator who is retiring after a 17 ½ year career at the JFK Library Foundation.

Those who couldn’t make the trip send messages to Tom that were read aloud, including Caroline Kennedy, US Ambassador to Japan; Vicki Kennedy, president of the Edward M. Kennedy Institute; Chuck Daly, trusted advisor to President John. F. Kennedy; and President Barack Obama.

Also present were historian David McCullough and his wife Rosalee, Irish Consul General Breandán Ó Caollaí, and an assortment of Kennedy family members, college presidents, judges, and others who worked with Tom over the years. Tom’s husband, Boston Globe writer Matthew Gilbert, attended, along with their family members.

Ambassador Kennedy praised Tom’s “incredible judgment, great sense of humor and the most passionate commitment to President Kennedy’s ideals and the mission of the Library,” adding, “You have been a wonderful friend and collaborator, listener and teacher.”

Vicki Kennedy thanked Tom for “the innumerable kindnesses you always showed to my beloved Teddy, me and all our family and for being such an extraordinarily supportive and collaborative neighbor of the Institute that bears Teddy’s name.”

President Obama wrote, “You have played an important role in inspiring others to carrying on (President Kennedy’s) work of forging a world that is more equal and just for all.”

McNaught was first hired as the communications director and rose up the ranks to become executive director of the JFK Library Foundation. He is credited with strengthening the New Frontier and Profiles in Courage Awards, coordinating events leading up to the 50th anniversary of President Kennedy’s death, and initiating the groundbreaking Digital Archives project to make President Kennedy’s papers more readily available.

“What an incredible gift it has been to arrive every morning at this magnificent I.M. Pei-designed memorial on Boston’s waterfront with such a noble mission of preserving and promoting the ideals and legacy of President John F. Kennedy,” McNaught said. He thanked the Kennedy family, the JFK Board of Directors, and his staff for their friendship and hard work over the years.

Lee Statham, director of marketing and sales at the JFK Library Foundation, was one of several staffers who came to the podium and spoke affectionately about McNaught’s role as their boss.

“Tom McNaught is genuine, smart, dedicated, resourceful, organized, talented and a great person to work for,” Statham said. “He represents the JFK brand in a way like no other. The lessons I have learned and the institutional knowledge he has shared are invaluable. He will truly be missed here at the Foundation but his legacy will be carried on here on Columbia Point. Working for him was exceptional.”