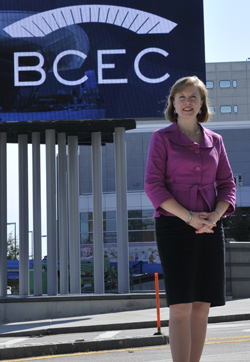 
Mia Tavan is Director of Marketing at the Massachusetts Convention Center Authority. She’s had a wide-ranging career, including working as a television weather reporter in Springfield, and in marketing at the MBTA and Boston Lyric Opera. She even had a brief stint as a professional fire walker. Mia is a multi-tasker: she started her new job in March and got married in July!

Mia talks to BITA about her job marketing Massachusetts to the convention and meetings industry.

First, congratulations on your recent marriage this summer. You went to Paris and Dublin on your honeymoon – did you bring home any marketing ideas?

Thank you so much! The trip to Paris and Dublin was a dream-come-true, since my family heritage includes French and Irish ancestry, and I have always wanted to visit both cities. What struck me from a marketing perspective was how strategies that are popular in the US are also prevalent in Europe, particularly engagement marketing efforts such as social media and mobile communication. I was surprised to see fellow visitors using iPads to take pictures, as well as to look at maps and pull up user feedback sites for recommendations. Mobile phones are also a major way to connect with brands there, as they are here.

It reinforces how in today’s global economy—of which the convention industry is a part—we need to engage regularly in two-way communication with our target audiences through those mobile channels, instead of just talking at them via traditional print and broadcast media. Of course, I was also keeping a keen eye out for how the local convention centers were promoted!

You’ve had an eclectic career – in television, financial services, the public sector, and nonprofit cultural world....what type of marketing skills best transfer from one job sector to the next?

Flexibility, creativity, and patience, for starters! Marketers always need to search out new audiences and explore new perspectives, and my experience in various industries has helped me hone those abilities. Maintaining relationships is also critical; working in marketing at the MBTA (that’s my hand in the photo on the fare vending machines’ screens in T stations!) and at Boston Lyric Opera involved significant interaction with the local travel, tourism and hospitality agencies, which I now work closely with in my current position. My colorful career to date has also helped me build a terrific network that has led to great partnerships and sounding boards over the years.

The Massachusetts Convention Center Authority has an ambitious project called the T5 campaign to make Boston one of the top five convention centers in the country. Boston is currently ranked as the ninth most popular convention city -- how do we break into the top five?

MCCA launched T5 about a year and a half ago. Our goal is to expand our market share and increase the amount of meetingsbased business we bring to Boston from around the world. This will enhance the economic benefit to the City of Boston, the region and the Commonwealth and trigger long-term economic development.

Just recently, the Boston Convention & Exhibition Center and John B. Hynes Veterans Memorial Convention Center earned a rare gold standard from the International Association of Congress Centres (AIPC), making Boston only the fourth city in North America and the twelfth worldwide to have been awarded this top standard.

But we aren’t resting on those laurels! We are working hard to provide the most technologically-innovative centers (check out our new media tower and video wall at the BCEC), support local vendors and lead the way in environmentally friendly practices. Not to mention superior customer service!

In 2010, the MCCA hosted 239 events at the BCEC and the Hynes with 773,387 attendees, generating 585,528 hotel room nights and $462 million in economic impact. But for us, it’s not just about “heads in beds;” the T5 campaign is designed to boost economic development by benefitting local businesses, service providers, state revenue and job growth. I’m eager to do what I can to facilitate that!

I wish I could go back to Dublin! I loved it! The Irish are incredibly gracious and warm, and I loved listening to and trying to read Gaelic everywhere. It’s a fascinating language. The city’s architecture, and all the Irish business names, reminded me greatly of Boston.

Of course, Dublin is much older with a breathtaking history. I was struck by the similarities in the layout of the commercial and residential districts to South Boston and other traditionally Irish neighborhoods here. No surprise, really! What was surprising was that a few locals asked me for directions—I guess I looked like I belonged there. I hope my great-great-grandparents from Shannon would have been proud!