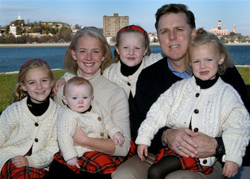 Senator Jack Hart with his Family

There’s an exciting, can-do attitude about tourism in Massachusetts in recent years, thanks to people like State Senator Jack Hart from South Boston.

A few years ago Senator Hart co-chaired the Joint Committee on Tourism, Arts and Cultural Development.  It gave him and his fellow legislators a first hand look at the cultural riches and the vitality of the arts community in Massachusetts.

“Cultural tourism is critical to the long-term health of our economy and our quality of life,” Hart says.

Today Hart is an active member of the T5 Committee, which is aimed at improving Boston’s share in the world’s convention and meeting industry.

The quality of life resonates with Hart, who grew up in South Boston, a distinctly Irish neighborhood nestled along scenic Boston Harbor.  In an article in The Boston Globe, Hart wrote,

“In my neighborhood on East Fifth Street we had all that we needed.  Our summers were filled with more joy than we thought possible.  As a special treat at the end of the day we often took a ride out to Castle Island for a hot dog and a Coke.  To us kids it seemed like heaven.  As an adult looking back, it truly was.”

Hart wants to maintain that quality of life as South Boston becomes more involved in the tourism industry.  The Boston Convention Center and Exhibition Center and the World Trade Center are both located in Boston’s Seaport District, along with hotels like the Seaport and Renaissance.  Cruise ships dock at nearby Black Falcon Wharf, and Castle Island remains a favorite destination for tourists.

South Boston also hosts one of the state’s largest public events – the annual St. Patrick’s Day celebration each March, which attracts over 600,000 visitors to Southie.

And Senator Hart presides over the annual St. Patrick’s Day Breakfast, held at the convention center on the morning of the parade.  It’s a popular event attended by over 1,000 people and seen on television by millions of viewers throughout New England.

Hart, who traces his family roots to counties Galway and Cork, lives with his wife Michelle and their four daughters, Kathleen, Maggie, Emily and Mary Kate in South Boston, not far from the parade route.  It is a place they are proud to call home.