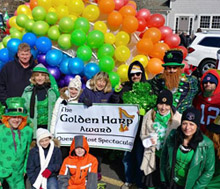 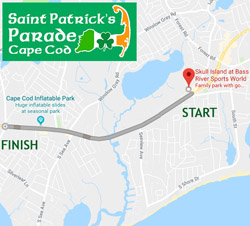 “From humble beginnings to today, we have been blessed with growth, achievement and support,” says Chairman Des Keogh, who thanked not only the spectators who brave the elements each year, but also the countless volunteers, local businesses, participating bands and the committee. He also thanked the Tourism Preservation Fund for its support.

Parade organizers have secured some great Grand Marshals over the years, from sports legends Bobby Orr and Irish Micky Ward to former Boston Mayor and US Ambassador Ray Flynn. Check the parade web site for updates in the coming weeks.

Each year, the Sons of Erin Cape Cod organization works in conjunction with the Parade committee to hold a Colleen Pageant for local high school females of Irish descent. The winner receives a $1,000 scholarship, while the three runners-up each receive a $500 scholarship.