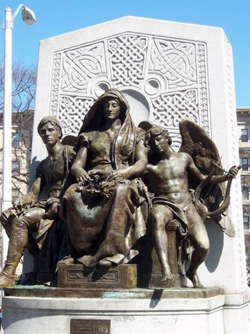 Patriot, poet, orator and editor John Boyle O’Reilly was a leading figure in Boston between 1870 and 1890. Born on June 28, 1844 in Dowth Castle in County Meath, O’Reilly was conscripted into the British Army as a young man, later charged with sedition against the British Crown and sentenced to life imprisonment in an Australian penal colony. In 1868, O’Reilly made a daring escape aboard a New Bedford whaler, Catalpa, a feat that shaped his legend by the time he landed in America.

O’Reilly arrived in Boston infatuated by the promise of American democracy and he spent the rest of his life advocating for the downtrodden. He spoke on behalf of Irish, Jewish and Chinese immigrants as well as African Americans and American Indians.

Each spring, the Massachusetts State Board of the Ancient Order of Hibernians conducts a memorial exercise on the third Saturday in June each year at his gravesite in Holyhood Cemetery in Brookline, MA near Chestnut Hill. This year’s event takes place at 11 a.m. on Saturday, June 15, and the public is invited to attend.

A memorial to O’Reilly is located on Boston’s Irish Heritage Trail in the Fens.