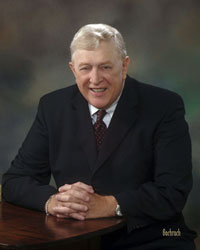 Dave Burke of Lawrence, Massachusetts had a certain way about him. He was big-hearted, generous to a fault. He had big ideas and could quickly put them into motion. He was big on loyalty, tradition and kindness. In short, he was bigger than life.

Dave’s devotion to Ireland, Northern Ireland and Irish-American heritage was truly remarkable. When Dave joined the local Division 8 chapter of the Ancient Order of Hibernians (AOH) in 1968, his life took on a new dimension of meaning and fulfillment. The timing seemed predestined, since it was the height of Northern Ireland’s Troubles. Irish Americans like Dave would come to play a key role in helping to mitigate the political, economic and social fallout of the age-old contention. 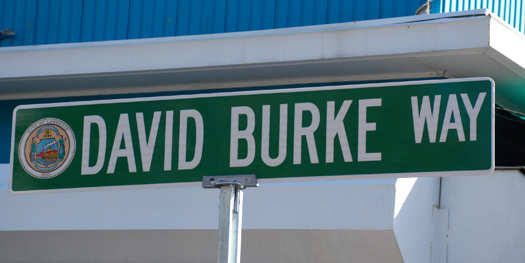 Throughout the Troubles, Dave was never afraid to speak truth to power, and was a vocal champion of the underserved and mistreated population that suffered at the hands of occupying British troops. He and his fellow Hibernians helped raise funds for an annual Christmas Drive to bring gifts to the families of prisoners. He donated historically important materials to the Linen Hall Library in Belfast and took several fact-finding missions to Northern Ireland as a member of the AOH Human Rights Commission. 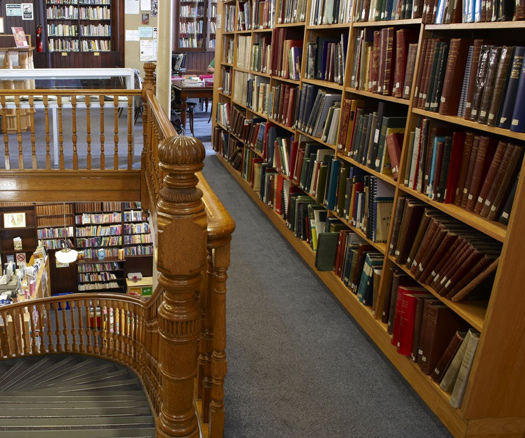 He was also active on the local front in Lawrence. Dave and his colleagues created a special Irish Collection of books, magazines, ephemera and artwork at the Lawrence Public Library, South Branch. Today the Irish Collection is notable as a valuable collection for scholars and authors as well as for local residents and school children.

And finally, Dave and his colleagues created the powerful An Gorta Mór (The Great Hunger) Memorial at Immaculate Conception Cemetery in Lawrence. It was part of a series of Irish Famine monuments to mark the 150th anniversary of the tragedy that sent millions of Irish refugees abroad to places like Lawrence, Lowell, Boston and other places. 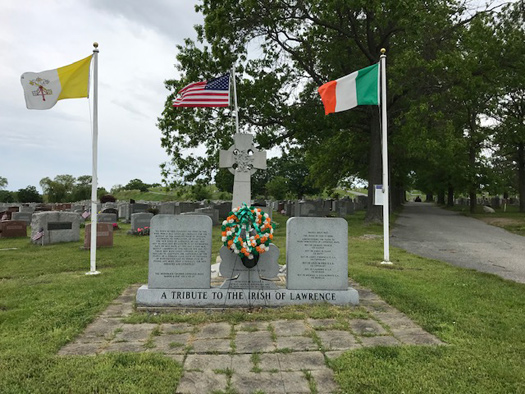 Moreso than his love of Ireland, Dave loved his family, church and country. He loved the city of Lawrence, his home town, and the people there loved him back. He worked at the Lawrence Housing Authority for 35 years, helping people find affordable housing and making sure everyone got a fair shake. He supported the Lawrence History Center and was always on hand to support other ethnic causes, whether it was by volunteering, donating or showing up. He and his wife Pat and son Kevin were always there for Lawrence. 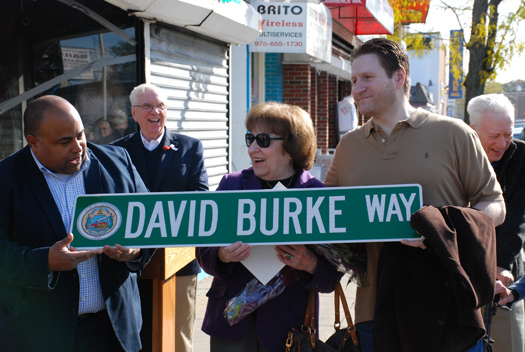 That’s why it was a special occasion when Lawrence Mayor Daniel Rivera joined the Burke Family and friends in 2017 at a special ceremony to rename a street David Burke Way, not far from St. Patrick’s Church, where Dave once ran a small Irish gift shop called Irish Jaunting Car Imports. At the street naming ceremony, everyone spoke of Dave’s contributions as a civic and community leader as well as a nationally recognized leader in the Irish-American community. The City issued a Proclamation to “posthumously honor Dave Burke for his lifelong commitment and significant impact to the Lawrence community…we thank him for making Lawrence better.”

That was Dave’s way, to make everything better, in all of his endeavors.