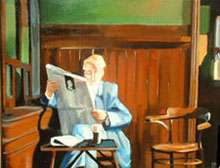 The Quiet Pint by Jay Mulligan 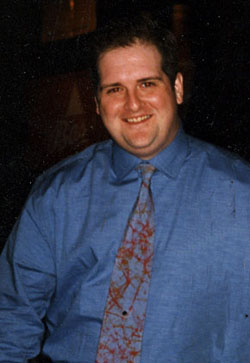 Over the past decade, the Quincy resident has emerged an accomplished artist, creating original acrylic paintings and prints of the landscapes, people and pub scenes of Ireland.

Jay describes his artwork as “postcards” and followers of his work cite his “loose painting style, unique views of familiar subjects, and especially his brilliant use of color” when praising his talents.

Mulligan’s paintings have been featured at various galleries in the area, especially at Lorica ArtWorks Gallery in Andover, a studio renowned for its exquisite collection of original paintings by artists from Northern Ireland.  Gallery Owner Mia Guerra says Mulligan’s work is immensely popular with her clientele, who appreciate the whimsical yet realistic portrayals demonstrated in “The Quiet Pint” and “Falling out of McDaid’s.”

How did Mulligan become so interested in Ireland?  Well, that’s a story unto itself.  In 1994 Guinness launched an immensely popular “Win Your Own Pub in Ireland” contest, in which contestants were asked to describe a pint of Guinness in 50 words or less.

Jay entered the contest, along with 31,000 others, and he was one of ten finalists who were sent to Ireland in the spring of 1994 to compete for the grand prize, joining two fellow Bostonians, Mary Jo Harris of Brighton and Frank Landry of Southborough.

By then it was more than simply being prosaic.  Finalists also had to demonstrate their bartending skills – pouring a perfect pint – and the ability to play a decent game of darts.

When it came time for the finalists to sing their praise of Guinness, Mulligan’s poetic treatise was considered an Irish haiku:

The Process, The Bar

The Stool, The Bartender

The Question, The Answer

The Usual, The Guinness.

Need we say more?  Mulligan won the pub, besting over 31,000 aspiring publicans.  He spent the next year tending to his duties at Connie Dolan’s while serving as an international spokesman for Guinness.

In the process, he traveled the length and breadth of Ireland, and inspired him

Jay works mostly from photographs that he has taken from his many journeys. Mulligan’s process, “I compose my paintings based upon interesting views then I vigorously paint the canvas taking advantage of strong light, shadows and the injection of color to energize my paintings and make them come alive.”

Aside from being an accomplished artist, Jay holds the honor of being the first winner of the “Win Your Own Pub in Ireland” contest sponsored by Guinness. In addition to his publican duties at Connie Doolan’s Pub in Cobh, Co. Cork and as international spokesman for Guinness, Jay managed to do quite a bit of traveling while in Ireland, and what he saw inspired him to treat Ireland as his artistic muse ever since.

Today Jay works out of his studio in Quincy, and returns to Ireland regularly for renewed inspiration.  He is currently writing a book about his incredible experience of winning a pub in Ireland and his escapades gallivanting around Ireland.

We’re assured it will be a colorful tale.