THE CLANCY TRADITION
FROM COUNTY ARMAGH TO CHATHAM, CAPE COD 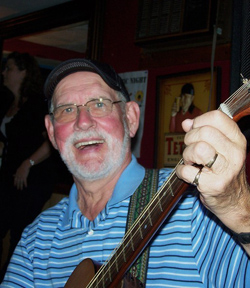 In the 1950s, one of the finest traditional Irish music ensembles in Northern Ireland was the Clancy Brothers Ceili Band, out of Charlemont, County Armagh, led by brothers Pat, Eugene and Brendan Clancy.  The talented trio toured North America as the Irish Ramblers in the 1960s with their hit album, The Patriot Game (Electra Records, 1963).

We were delighted to learn recently that the Clancy family is still playing great traditional Irish music on Cape Cod!  We caught up with guitarist Eugene Clancy in Chatham, to find out more.

How did your family get started in music?

There was always a lot of music in our house, particularly on a Sunday afternoon after mass, when we played tunes in the parlor.  We all started on the piano at home, when we were small.  The teacher came every Tuesday, and we all took a half hour lesson, one after the other.

A friend of ours from nearby Collegeland had a piano accordion, and my older brother Pat borrowed it and practiced very hard and became very good on it.

Sean Maguire –whom Seamus Connolly said was a genius and one of Ireland’s greatest fiddle players –was an inspiration to you and your brothers?

Yes, Sean was great.  He had already won the All Ireland Oireachtas Fiddle Championship by the time we met him.  Pat ended up playing the accordion in Sean Maguire’s Ceili Band.  Whenever the Band played around Armagh, Sean would stop by the house and my mother would never let him leave without playing a few tunes, especially The Mason’s Apron.

Who else was playing in Armagh back then?

The McCusker Brothers Ceili Band was probably the most famous.  There was Johnny Pickering in the Moy, Jim Daly out of Coalisland, the St. Peter’s Ceili Band, the Old Cross Ceili Band from around Dungannon, and the Round Tower Ceili Band from Armagh.  Fiddler Charlie O’Neill from the Moy was a great influence; he had tunes nobody else knew.  Groups like Altan play Charlie’s tunes today.

How did you end up in the US?

I like to tell people I came here for three years and ending staying for 40!  We were playing at a pub in Dublin, and a promoter asked if we’d like to tour America.  In 1963 we came out as the Irish Ramblers – Pat, Brendan and myself - and we were on the road for the next three years.

After that, Brendan moved back home and became a teacher.  Pat kept up the music; he played with many musicians and lived in San Francisco for a decade.  Then he moved back to New York and toured for a long time with the Gus Hayes Band.

I started a moving and storage company in New York and spent many years building the family business.   A few years ago, we were moving the Rogers and Hammerstein Music Collection at the Lincoln Center in New York, and I was delighted to find our record, The Patriots Game, in pristine condition!

Tell us about your band, The Clancy Tradition

In recent years I’ve taken up the music again and formed The Clancy Tradition with Pat, along with my son John on the upright bass, Rosemary on mandolin and fiddle, Pat’s daughter Liadain on vocals, and Mike Melanophy on button accordion.

We spend a lot of time in Chatham; my daughter Rosemary has a house here.  We perform at the First Night celebrations in Chatham every New Year’s Eve, playing two concerts.  In the summer we play a session Sunday nights at O’Shea’s Old Inn in West Dennis.  Last year we played at the Cape Cod Celtic Festival.  We’re playing again this year, opening for Aoife Clancy and Robbie O’Connell at the Orleans Inn.

We love your album, The Clancy Tradition at the Towne Crier in New York, especially your rendition of Bere Island.

Thank you.  We recorded that album in 1998 at the Towne Crier in Pawling, New York, it’s a fantastic venue for hearing music.

Any other recordings in the works?

Pat is working on a solo CD of his accordion music - jigs reels, hornpipes and slow airs – which should be ready this Christmas.  I’ve been compiling a collection of music our family has played over the past 50 years, including some rare reel-to-reel tapes of our radio broadcasts back in the 1950s.  I hope to get that finished some day!

Do you have a favorite tune?

The Patriot Game by Dominic Behan is my favorite tune, without doubt.  Dom wrote the song around 1960, and we did a tour of Scotland with him shortly after that, and made it the title track of our album. The song will become part of the folklore of Ireland.