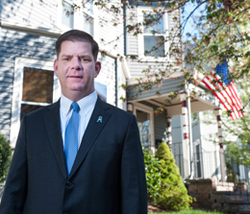 
Congratulations to Martin J. Walsh, Massachusetts state representative from Dorchester, who has been elected as the next Mayor of Boston. He defeated his opponent, Boston City Councilor John R. Connolly in November and takes office in January 2014.

Walsh, the son of Irish immigrants, grew up in Dorchester’s Savin Hill. He vowed to make Boston an inclusive city where jobs, housing and educational opportunities are equally distributed across the city’s neighborhoods. Connolly was gracious in defeat, vowing to work closely with Mayorelect Walsh in the coming term. Walsh reciprocated in kind by praising Connolly for his well-fought campaign.

Both of Walsh’s parents come fromConnemara in County Galway. His mother, Mary, comes from Ros Cide in Rosmuc, while his late father, John, hails from Callowfeenish in Carna. They both emigrated to Boston in the late 1950s and met at Intercolonial Hall in Roxbury’s Dudley Square, a popular dance hall for Irish immigrants at the time.

Elected as state representative in 1997, Walsh developed a powerful coalition of labor unions, neighborhood activists, elected officials and ordinary citizens who support his message of inclusion and opportunity for all.

At the campaign party at the Park Plaza Hotel in downtown Boston, the Dropkick Murphys performed during the night. Shortly after Walsh was declared the winner, he received congratulatory phone calls from President Barack Obama, former President Bill Clinton and Vice President Joe Biden.

The day after the election, Walsh spoke to Raidió na Gaeltachta, greeting the listening audience in Irish. He promised to visit Connemara in 2014, according to a story in The Irish Times.