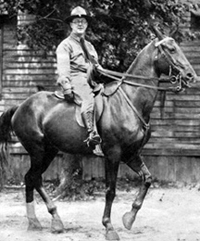 Edward was the oldest of nine children of Lawrence and Catherine (O’Connor), according to Michael Cummings of Milton, an expert on the Logan Family.  Edward’s father Lawrence immigrated to Boston from Ballygar, County Galway, in 1858, and became a successful businessman at a young age when he became president of the Boston Brewing Company in South Boston.  The family resided at 560 East Broadway in South Boston.

In 1898 during his senior year at Harvard University Logan enlisted in the 9th Irish Regiment of Massachusetts when the Spanish American War broke out in Cuba, joining his father Lawrence, who was a Lieutenant Colonel in the regiment.  Edward stayed stateside at Camp Dewey in Framingham taking charge of reenlistment, while the regiment sailed to Cuba.  It suffered heavy casualties, and Lawrence Logan himself nearly died of yellow fever, which claimed the life of his brother-in-law and Edward's uncle, Major Michael O'Connor.

Edward continued in military service, and during World War I was commander of the 101st Infantry regiment of the 26th Yankee Division, which fought with distinction.  It was the first state regiment to cross the ocean for France, leaving in August 1917.

Elected to local offices, Edward served as a state representative and senator from South Boston.  He made an unsuccessful run in 1906 for the Congressional 10th District, losing to Joe O'Connell, and was appointed a Justice of the South Boston Municipal Court in 1907.  He was active in charitable programs such as the Home for Destitute Catholic Children.  In 1929 Pope Pius made him a Knight of the Order of Malta in recognition of his charitable work during his life.

He died suddenly in 1939 of a "heart ailment" according to the Boston Globe.  His brother Reverend Leo J. Logan, presided over the funeral mass at the Gate of Heaven Church in South Boston, with tributes by leading politicians like Senator David I. Walsh, former Massachusetts Governor and Boston mayor James M. Curley and former Mayor John F. Fitzgerald.  He is buried at the Calvary Cemetery in West Roxbury. 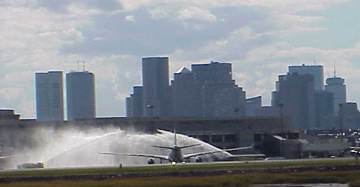 In 1943, the Massachusetts state legislature voting to approve a $4.75 million expansion of the East Boston airport, and state house lawmakers voted to officially name the new airport in honor of Edward L. Logan in 1956.