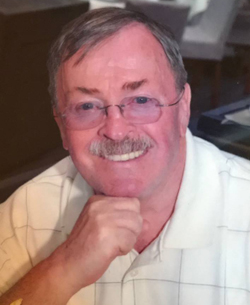 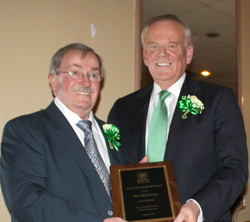 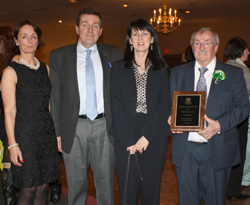 SLIGO MAN OF THE YEAR!

For decades, Bill McGowan avoided the awards people tried to bestow on him for his good deeds. He prefers to work behind the scenes, and to give the accolades to others.

But this year his friends and admirers finally convinced him to accept the Sligo Association of Boston’s Man of the Year award, presented at its annual St. Patrick’s Day banquet held on March 1 at Florian Hall in Dorchester.

Among the guests at the banquet were Father Dan Finn, co-founder of the Irish Pastoral Centre; Jim Brett, head of the New England Council and toastmaster for the evening; Sligo Association President Seamus Healy; plus Bill’s wife Bridget, his sister, Sister Josephine Goretti and family members, even some who flew in from Ireland to attend.

McGowan has been a leader in Boston’s Irish community for four decades, so singing his praises came easily. The seventh of eleven children born in Cloona, County Sligo, Bill entered the seminary as a teenager, joining the Missionary Society of St. James the Apostle, a group that sends priests to missionary service in the poorest countries of South America. The Society was founded by Boston’s own Richard Cardinal Cushing.

Assigned to Bolivia in 1966, Bill traveled from village to village, setting up credit unions for the poor and finding ways to improve social and educational conditions. In 1970, deciding that “God would call him to other things in life,” he left the priesthood and moved to Boston.  He married Bridget Reaney from Connemara in 1972, and both became active in Boston’s Irish community. Bill helped form the Shannon Blues Gaelic Football Club in 1974, and was active in the Gaelic Athletic Association, serving as Chairman of the New England Board and on the national board.

Bill started an accounting firm in 1978 and began helping Irish immigrants and local residents with their tax returns. Just down the street from St. Mark’s Parish in Dorchester, he opened McGowan’s Corner Store in 1985, a gathering place for Irish immigrants pouring into Boston during that decade. Many were undocumented, leaving home for greener pastures but unable to secure a visa to stay in America. Seeing a need, Bill stepped in to help.

On July 12, 1985, McGowan & others launched the newly-formed Massachusetts Immigration Committee, serving as its chairman. Its daunting mission was to convince the US Congress to amend the 1965 US Immigration Act, which unintentionally blocked people from Ireland and other countries like Italy, Germany and Greece from getting permanent US visas. Dorchester’s own Congressman Brian Donnelly had just filed a bill in the House, and the Committee’s goal was to garner support in the Senate too.

What began as a meeting of 60 people at the Irish Social Club quickly became a national movement, with ethnic groups across the country joining forces to advocate, publicize and coordinate a broad-based effort for immigration reform. Their efforts bore fruit, and in fall 1986, Congress passed the US Immigration and Control Act, including the Donnelly Visa, which allotted 40,000 permanent visas to Europeans, of which 18,363 went to the Irish.

As the Irish began moving out of St. Mark’s, the McGowans moved to nearby Quincy, where Bill set up McTaxes, a year round tax service and Bridget ran Dupont Insurance Company for auto and home policies. Together they have assisted thousands of Irish tradesmen, blue collar workers, and self-employed workers over the years.

Then, another challenge came his way. Bill’s youngest sister, Sister Goretti, was assigned to a Catholic parish in the city of Lagos, Nigeria, one of the poorest, most violent and corrupt cities in the world. In 1997, Bill suggested they hold a Boston fundraiser for the Catholic school. They raised $7,000 in the first year, but the project gained steam, and in the ensuing decade Bill and his committee raised nearly $900,000 to build a new school with libraries, computers and a day care center. Today over 2,000 children attend the school, with 37 teachers, all trained by the Irish nuns.

McGowan took the prize and praise in stride, evoking President Kennedy in urging people to “Ask not what others can do for you, rather ask what you can do for others? In answering that question, you’ll tap into an important aspect of our Catholic faith and who we are as Irish people.”